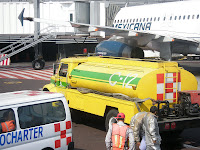 I think I mentioned that Daddy Len is a pilot. Well, he just got back from Mexico and boy did he have a story for me! I was SUPER excited when he told me that he saw a swarm of killer bees.....well, they may or may not have been killer bees, but at least I got your attention! I am not sure if bees are considered animal friends of mine or not.....but I am sure I would not like to get stung! 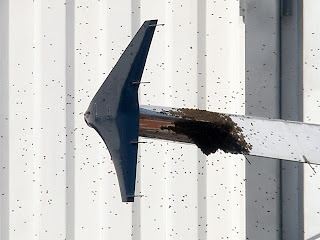 Daddy Len had parked his plane at the gate in Mexico City, and he glanced at the plane parked next to him, and it had something funny on it's wing. He tried to see what it was, and realized it was thousands of bees that had been swarming and had landed on the airplane wing! 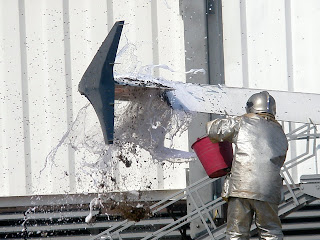 The airport people had put on funny silver suits that made them look like astronauts, and threw buckets of something liquid on the bees to get rid of them. It worked and my friends, the bees were killed! 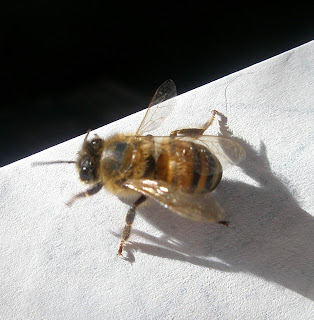 All except for one bee! This one bee tried to escape to Dallas in the cockpit with Daddy Len! Unfortunately, he did not make it all the way.....

For more details on this story, please go to Views From the Left Seat.
Posted by JB's Big and Small Worlds at 4:23 PM

Huh, that was pretty spooky! I would not like to meet these bees!

Hey there, J.B.! Thanks for visiting my bloggie. That's an amazing story and pictures! Wow--I hope we don't get any of those up here in Ithaca.
Your new buddy, Jimmy Joe

Wow! What an exciting story! I never heard of anything like that happening to a plane before. What airline does your Daddy Len fly for? My grandpa was a pilot for a long time with Western Airlines, then Delta. I passed away before I was borned though.

Wow JB this is something I wouldn't like around me, people used to die from them where I used to live in Europe. So daddy is a pilot, do you ever go on the trips with him? Anna :)

Hi dere JB. Thanks for visiting me. I is one of Daisys dearest friends (with about 300 other cats).

Wow dem bees look very scary. You tell your pilot dad not to bring any of dem home with him.