This Side & the Other Side of the Island of Texel

Here is my mom, still reporting from the island of Texel in Holland. I snuck this picture in of my mom on Big World Assignment! And what is that large animal on the right side of this picture?

It is a very large pony.....two ponies in fact, but one is too fat to even get up for mom! And where are the pony's legs? Even my friend, Simba , has longer legs than this!! 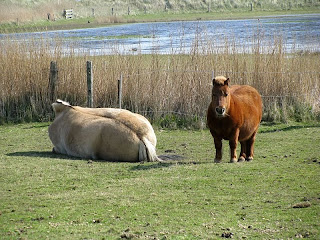 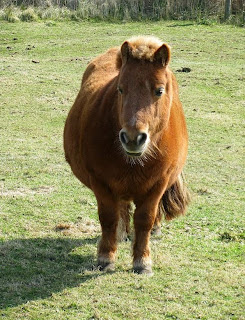 The pony also said he would LOVE to be friends with me! He said, maybe JB will make me famous and get me out of this tiny pasture in tiny Texel! It is a little lonely here! 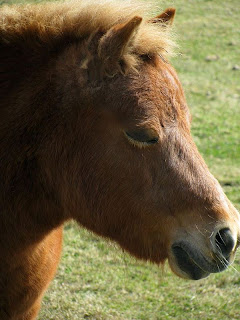 The pony closed his eyes tight, concentrated really hard, and tried to teleport over to me immediately! 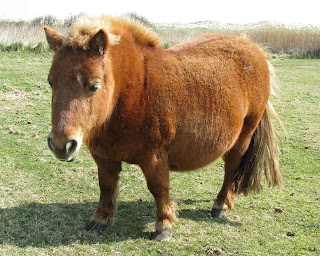 Mom asked the pony why he was so stout, and he said that he gets lots to eat on this side of the island. He told mom that she had better go feed the smaller ponies on the other side of the island because they had run out of grasses!

THE OTHER SIDE OF THE ISLAND:

Here are the smaller ponies. Mom quickly fed them grass she picked from outside their pasture and they were happy. 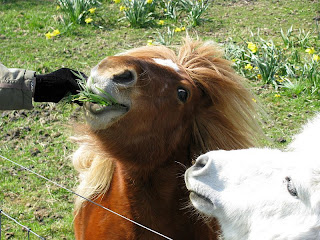 My mom said, "My what big teeth you have!" And the ponies said "All the better to eat grasses fed to us by JB's mom!" 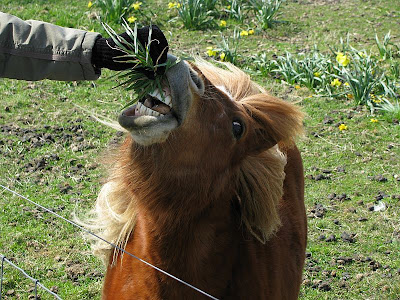 I like these ponies from both sides of the island and I am glad they are my friends!


Before you go, please sign my GUESTBOOK, and stop by my SMALL WORLD too, thanks!
Posted by JB's Big and Small Worlds at 2:21 PM

Hi JB! Those little horses sure are cute :) I wonder if they pull small wagons,heehee
It was nice of your Mom to feed the other little horses :)
Mom likes the big horses too :)
Those are a lot on neat new friends !!!
Purrs Mickey

I liked all of the ponies, the big ones,the small ones and the medium ones. That was wonderful meeting your new friends and maybe one day ponyteleportation will happen! =)

Wow, great photos of the ponies! But, are you sure that tan one is a pony? He sure is big boned! He looks like a ton sack of potatoes! Your Mom must like horses and ponies and cows... she's always on reporting assignment and comes back with photos of them. You are going to make the ponies famous because of your post!

JB, I voted for your scary eyes!!!! I have my paws crossed that you win!

Wow! They are very big ponies! We have little ponies here too but they are not big like those ponies. I think they are Bull Ponies he he!

Your pony friends are very big...Do they only eat grass??

Your Mom finds you such nice friends...

Those are very fat ponies! Goodness! Are they a special breed or just over-fed?? The small ones seem very grateful for the grass :-) Lovely pictures....you saw a lot of neat animals here.

Hi JB! Amazing pictures from Texel. Something Dick (from Eye on Texel) never showed us...) ;))
Thanks for your comment on Blogtrotter, where I’m exploring a new country now. Surprise! ;)
Hope you have a great weekend!

OMG JB! What a cool post. I love the fat ponies. I hope they are healthy though. How cool your mommy was there. I bet you miss her.

Oh my god, even ponies can be obese! It has to walk with me now. I have to go in the next city to open a museum and make about 4 km at feet. So the pony coud maybe have the hope to turn to the normality (as I have)

Hi JB!
What cute ponies! We've never seen any like them before! Hee hee.. we like how they've got short little legs!
Wags and licks,
Maya and Kena

hi JB, those are interesting ponies. we have never ever seen any animal as fat as those. they look nice and friendly though. it's too bad they couldn't come to visit you.

JB, I like your new friends! They have really great hairstyles, too.

Those little ponies are ssooooo cute, and that one brown one is Very round!!

You are very lucky, 'cause you have a lot of incredible, cute and nice friends!

Those are some chubby ponies!

JB - those ponies are AWESOME! Where is the first pony's head & legs??

JB.....Those ponies hardly have any legs...I think they need to go to Jenny Craig for sure.
Deetz