If you did not read Part I of this report, please click here for JailBird Report - Part I. Today's post is about the continuing saga of PooPoo, Calico Cat, incarcerated with a 30+ day jail sentence for excessive carpet pooping. This follow-up Big World Report, is courtesy of an unidentified snitch!

After a week of sleeping in her litter box in her own filth, PooPoo appears to be turning over a new leaf. She has been sleeping peacefully in her TreeTop Apple Juice box. (Advertising royalties to follow.) 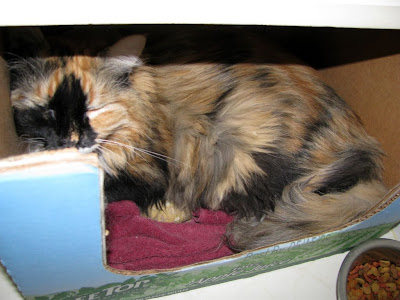 PooPoo has been a difficult inmate, only eating select hand-fed delicacies. 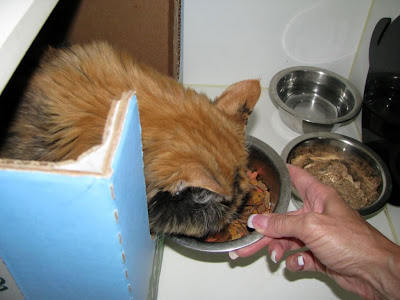 Word is that there is some unrest within the confines of the jail and that the "East Hills Gang" has been formed under the watchful eyes of the menacing, evil JailBirds! 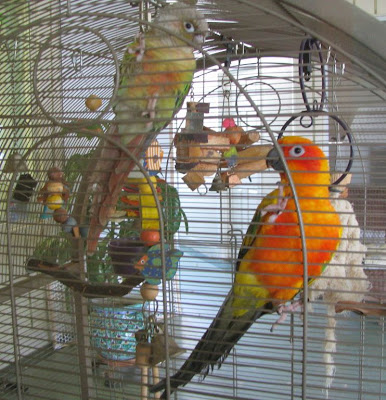 Rumor has it that there are plans underway for a Jail Break! Members of the new "East Hills Gang" include: 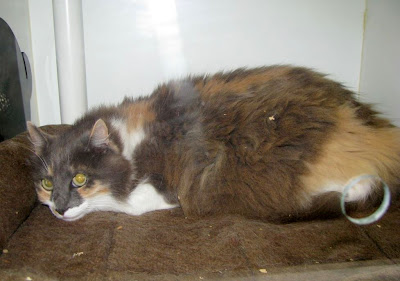 Minnie - AKA "Minnie-Me" or "Sticky Paws" 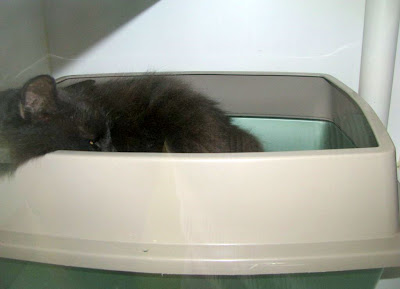 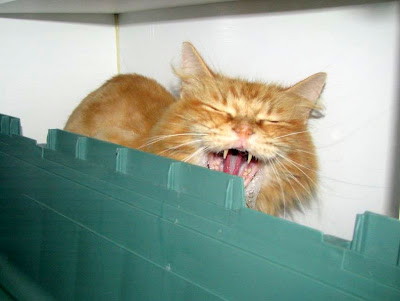 And, last but not least, PooPoo - only known as the dreaded and much feared "PooPoo" This sure is a shady bunch of characters!

One thing stands in their way, in order to break out of jail, however. They must find a way to get past one mean Jail Guard. He's bad, bad, Robbie Brown, the meanest Dog in the whole Jail Yard!! 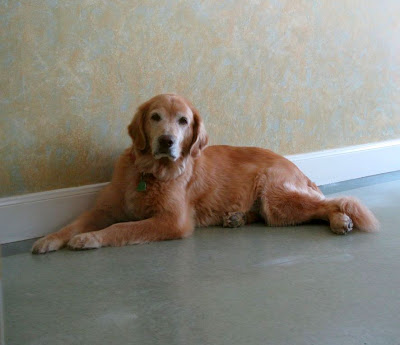 Before you go, please sign my GUESTBOOK, and stop by my SMALL WORLD too, thanks!
Posted by JB's Big and Small Worlds at 8:37 AM

Oh PooPoo, where did you go wrong? ;)
Very cute PooPoo update! Her fellow jailbirds (birdies and kitties) are cute, as is the woofie guard.
I know your Mom misses her very much. Soon, you will all be together again! I'm glad she's sleeping in a nice cat tree now.
Hugs to you all!
Lorianna

She hasn't been there very long and has already formed a gang!!! Oh my, when she gets out I have a feeling there will be hell to pay. Those are some shady looking characters for sure. I would hate to meet up with them in a dark alley...scary!
I have a feeling poopoo is going to be on the cover of a newspaper soon....."The Great Kitty Escape"....oh the horror
Deetzy

Oh dear. I hope she doesn't pick up any more bad habits in that jail!

Poor PooPoo - There I said it again :O)

Hmmm, I always thought PooPoo looked a bit shady with her fanciful color coat. When she breaks out of jail, I wouldn't be surprised to see her smoking a cigar!

This came across my desk today. Thought I would pass it to you... heck, who knows!

From my friend:
I just heard from an attorney representing the estate of Pat Cotten who is a long time breeder of Eskies in Texas there are 9 intact toy Eskies
ranging from 1.5 years old to 12 years old. If you know of anyone
interested please have them contact me at _____________@yahoo.com.
Thanks,
Jane"

If you're interested, let me know! But, these aren't standard sized eskies, they are toys... and well, I'm sure your favorites are the standard sizes... I'm a standard size.

w00f's JB, cant wait till part 3...heehee dont no who looks the shadiest, the kitties, birdies or dat doggie...

Poor Poo Poo. We hope you are rehabilitated soon so you can get out. Maybe your sentence will be reduced for good behavior.

Oh no, jail for excessive carpet pooping! Yikes. We hope you can break free soon.

I am sorry for Poo Poo. I hope she will be better soon and get back to normal. I think that she cannot wait to come back home as well as you are.

There are so many cats there for me to chase.

I will dream about all these cats.

AHHHH... Dusty aka Gang Tooth sure looks like one mean character!! Those fangs look eviiiiiiiiil... Do they get parole for poop.. oops, I mean good behaviour??

JB, we sure hope you sell your house soon so PooPoo can come home to your new one. We don't want her doing a jail break and being incarcerated for even longer! That would be too tragic! Have a Happy Saturday!
Purrs and headbutts,
Sabrina, Sam and Simon

Oh My...PooPoo & the gang are planning a Jail Break???

Tell your Mom to cover the carpets...

With all those partners in crime you should be broken out in no time..

that jail sounds like a pretty tough place. Brody did a short stint in jail when he chewed Burt's head off. it was ugly.

Oh,oh! Something big is going to happen!
Good luck!
Kisses and hugs
Lorenza

Crikey sounds like it all happening JB. That Fang Tooth looks a shady character.

Poo Poo. Do you need my help? I will be on standby in case you need me ok? Let me know anytime!

Poo Poo let me know if you need a getaway car.Yikes that's a big woofie.

Poo Poo, you will manage to escape! If you need my help, call me!! Muahahahaha!

Fang tooth sure look scary. Maybe you cats can watch prison break for some ideas. But one cat needs to be tattooed

My mom wants a parrot and a cat, already have turtles, a dog and me!