This is my good friend, Deetz. Deetz is an Airdale Terrier, and somewhat of a celebrity, in his own right. He filled in and did a special report for me, as a Celebrity Reporter, since my mom has been so busy. Deetz went on Big World Assignment to Mulvane Kansas, to the Mulvane Saddle Club. They were having a Bull Blowout! 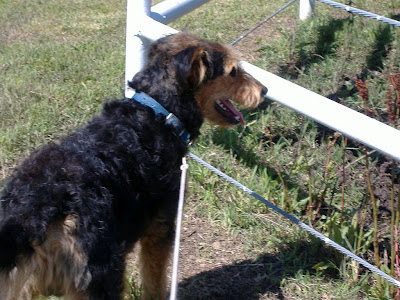 Deetz was very intent of finding me some more new friends. He viewed the bulls carefully and safely from outside their pen, and even brave Deetz had to admit, he was just a tiny bit scared. These were some big bulls! 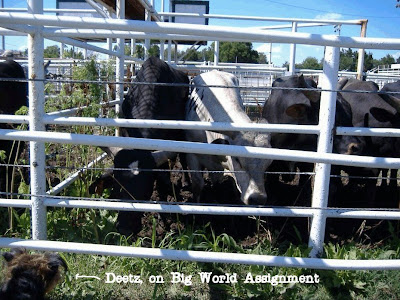 Finally Deetz settled on this white Bull, as he did not seem to be so mean and mad. Deetz got his nerve up and asked the white Bull if he would be my friend, and he said yes! 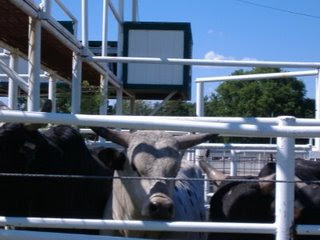 This was quite the event, and Deetz's daddy was in the ring riding his horse, helping to round up the bulls. I think Deetz MUST have gotten his bravery from his daddy! 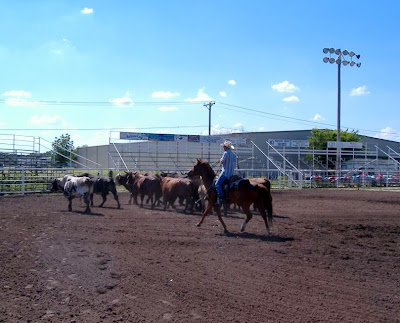 There were people who were trying to ride the bulls too. I think this is not a good idea at all, and I for sure would not want to ride a bull! This can't be safe! 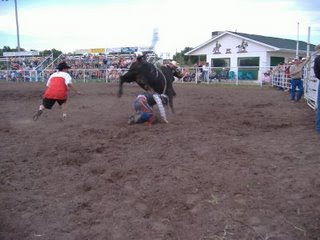 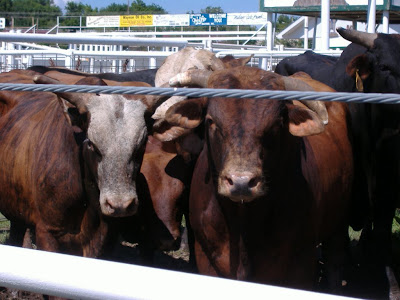 As a last ditch effort, in his desire to bring me back a good report, Deetz, was able to get me one more friend, a Sheep. Deetz said that this sheep was yelling BAAAA, BAAAA, BAAAA. Deetz did not know what BAAAA meant, but since the sheep kept yelling it, he must have wanted it baaaad!! 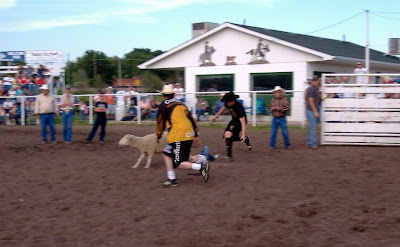 All in all, an excellent report, from my good friend, Celebrity Reporter, Deetz! He certainly gave me a outstanding report even if it was a whole lotta Bull!

To visit my friend, Deetz, please click here. He is a great friend and doggie!

Before you go, please sign my GUESTBOOK, and stop by my SMALL WORLD too, thanks!
Posted by JB's Big and Small Worlds at 9:36 AM

JB
I was so happy to help you out on your big world assignments, it was a great honor!!!! You are excellent at putting together a story and I thoroughly enjoyed reading every word of this report.

Have a happy 4th of July weekend and this is Deetz, Celebrity Reporter, signing off from Belle Plaine KS Tune in next week.....
Deetzy

Wow, JB ... That was some pretty pawesome guest reporting by Deetz. It's furry cool that you've got your own genuine bull to be your friend.
DMM

w00f's JB, me wood b sooo skeered of those bog ole bulls...deetz is verwy brave fur takin picturs and all dat...

You sure do have a lot of unique friends! :)

Fantastic post... had me on the edge of my seat... great photos!!

Oh my, I think I would be very scared of those bulls. He is a very brave doggy to get so close and take pictures too.

Your friend Deetz was brave to do this report.Those bulls looked too scary to me!!!!!
Purrs Mickey

That's a pawsome report from Deetz. :)

Those bulls do look rather scary!!

JB, Deetz is such a good matie to find new friends for you.

So many times I've seen the reports about rodeo, but always had a sensation that it's something not true, a pic. But when I've seen your report, I feel it as I was there too.

He did a great job.I would have been scared of them cause of those sharp horns Deetz is brave.Have a happy and safe 4th Of July :)

hi JB, Deetz is a really brave dog to talk to all of those bulls. we think they look very scary and we sure wouldn't be talking to them at all. maybe the sheep, cuz it kind of reminds us of us! hee hee

Yep, Deetz is quite a guy, but we didn't know he could write yet. He did a good job for you.

Hi JB! Great post!
Thanks for your comment on Blogtrotter, now on its last post on Santiago de Compostela! Wish you a great 4th of July and wonderful weekend!

I think bulls are mainly good for bully sticks.

Hey JB,
That's a great story! Deetz & his daddy must be really brave. We like lammies cause Lamb is our last name, baaaahhhhhhhh! Even Mama's car plate is BAAAAAA, heheheheh.
We hope you have a great holiday weekend!
Luv & Wirey Hugs!
Butchy & Snickers

Wow, a good reporter Deetz is! I wonder if I can be a reporter for you one day....

I think there is a doggie chew toy called a bully stick. JB, do you know what those are made of? I don't think your new bull friend would want to know!

p.s. I had more to blog about than that jar of Jif! But, my Mom was too busy to be my secretary until today! I dictated my post today, but I still have more to say! Guess it will just have to wait. My Mom says she is "busy" again. Plus, my computer is sick and it may take some time for it to heal up!

JB, are you really going to move? But you already have such a nice house... I have seen the interior in your photos. I hope your Mom does not forget to bring you to the new house! Tell her to write a note to herself!

JB, your blog is so cool... you're giving a very cool voice to the animals! Hana the dog is a good friend of ours too. And yes, I do like cats... sort of... well I mean, I may bark at them, but I'm a pacifist at heart. And my Big Sis keeps threatening to get me a kitty sister... yeesh.
PS I think the panda is cute too!

Ohhh, you have met Ronak! I met Ronak's Mom last year when she came to SF for a conference! And, she will be coming again.... but without Ronak once again. Too bad Ronak can't come with her.

Oh wowie, those bulls are BIG!!!! Kinda skeery. But the sheep's kinda cute!

Ariel and me haffen't set a date yet, but we'll be fixin to soon! *grin*!

Kittyhugs and purrs from MaoMao!

JB, I like your friend deetz, he is very nice. These are in fact cool photos, I like the one in action especially. anna :)