My good friend, Hana the Dog, submitted one more Big World Assignment last year before she passed away.  She sent her mom and dad to the Berlin Zoo for a first hand report on Knut, the Polar Bear! 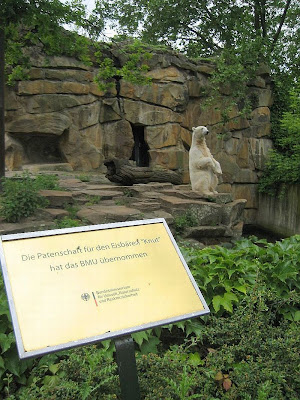 Knut is very famous in Germany.   He was born Dec 5, 2006 at the Berlin Zoo but was rejected by his birth mom.  The zookeepers then hand raised him, and he was the first Polar Bear cub to survive in captivity in more than 30 years. 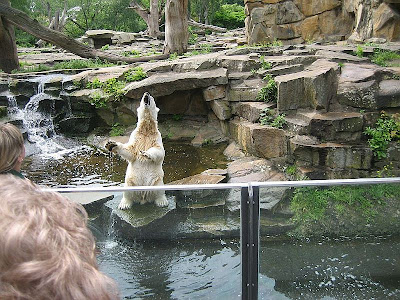 There was controversy about the cub being hand raised by humans, and that the zoo was violating animal protection legislation by keeping him alive. 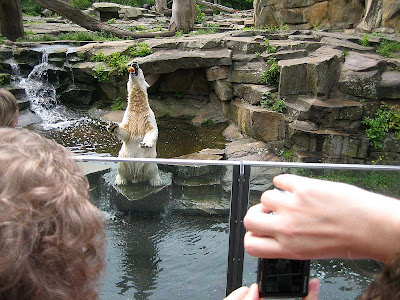 Thankfully, Knut was cared for and today is a healthy adult Polar Bear!  He sure is good at standing up and catching treats from the visitors at the zoo! 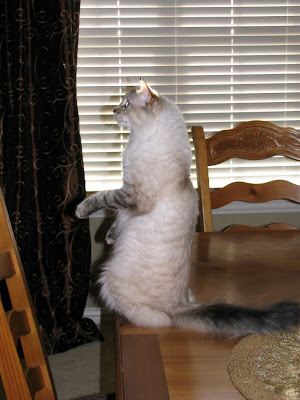 I like my new friend, Knut, and I do believe I might have some Polar Bear in my jeans!   What do you think?

Thank you Angel Hana for this wonderful report!

Before you go, please sign my GUESTBOOK, and visit me in JB's SMALL WORLD too, thanks!

Holy Mackerel~!!! Mmmmmm, mackerel. You have POLAR BEAR JEANS!!! WOW! You sit just like Knut. We're glad he's still here. There sure are some dumb people out there! So what if he was hand fed and tended to when he was little?!?

JB, I do believe you are part polar bear! How did you learn to sit like that?

My Mom says visiting Knut was the highlight of her trip to Berlin. Of course, Knut is a STAR! And he knows it too!

~Prints the Cat (brother to Angel Hana the Dog)

Oops, I meant to post that as Prints the Cat!

That is a very interesting story. Thanks for sharing. We think you might have a little polar bear in you!

I think you have learned the classic polar bear pose! cute!
I remember awhile back, they thought Knut was acting strange in captivity. It's good to see him again!

Hi again JB. Yes, I see 3 pics of my friend, Knut. Looks like blogger is working again. I haven't had any trouble with blogger recently. I wonder what changed?

One more thing, JB. I forgot to mention to you that we got a free pack of World's Best Kitty Litter! We had emailed the company and asked for a coupon for a free package. A month later, a giant heavy package arrived on our doorstep! I haven't tried it yet, but when my parents change my litter next time, I will find out whether I like it.

I guess since the guy at the kitty litter place received emails from you and me, he got the message that this is serious business! We make a good team, JB! By the way, I didn't flush again last night. My mom thinks it may be because my pee was way in the corner, so I had a hard time flushing.

My secretary has not noticed the difference with posting pics! Maybe it is because she is using the latest template for my bloggy.

Hey, my Mom is quite surprised I have so much to blog about. She thought cats don't have much in terms of catventures, but I have proved her wrong.

Then I guess the kitty litter came because you got in touch with Drew, not because of my request. Thank you for doing that! I will try to mix my current litter with the corn litter and see what happens.

JB,
There might be some polar bear genes in you. You are a very lucky to cat to have lived so long. I know going to the vet was hard, but you are very healthy because of it. My cousins Bob and Betty don't do well at the vets. In fact, Betty becomes "the diva cat," and she isn't real nice at the vets. But, in real life, she is a sweet little girl.
Sally Ann

NAK and The Residents of The Khottage said...

I'm glad woo told me it was woo fur I really thought woo were Knut!

Happy New Year, JB, we are so impressed by your polar bear pose. Seriously you should be on on the spot light!!!

You totally have Polar Bear jeans. That's so pawesome! We think Knut is adorable and are so glad that he was given a chance in life.

I think you probably do have some polar bear jeans, JB. I don't get it. How can you violate an animal's rights by giving him a chance to live? Knut looks great and I am glad that he was hand-raised.

Lol JB yes definitely you have the polar bear in you genes, lol. Happy New Year my friend, and wow to the polar bear. I think zoo people did the right decision, because other wise what other choice he would have. Anna :)