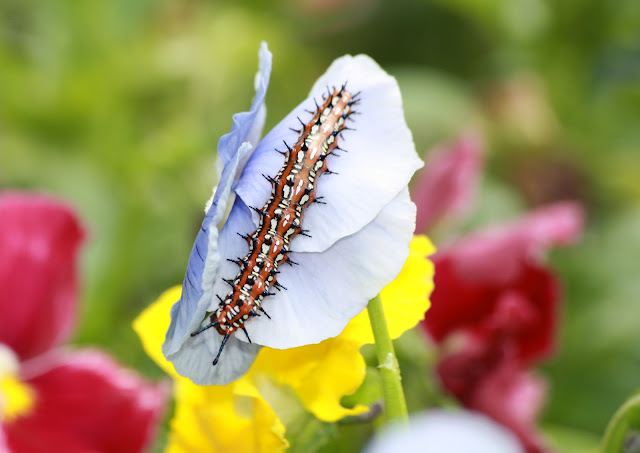 I guess it is time to pull out our pansies in our front yard.  The weather is getting hot, and there is a Variegated Fritillary convention going on, and they are all eating Pansy Salad!  Variegated Fritillary is a fancy word for a type of Caterpillar.
Mom is not pleased, and she says she is going to KILL all my little friends this weekend!
I told mom, she should not kill them because they will become beautiful butterflies soon.  Mom does not care.  :-(
Before you go, please stop by JB's SMALL WORLD too, thanks!
Posted by JB's Big and Small Worlds at 2:38 PM 3 comments: Links to this post

Mom continued on her Big World Assignment in South Texas near Padre Island with one more stop. 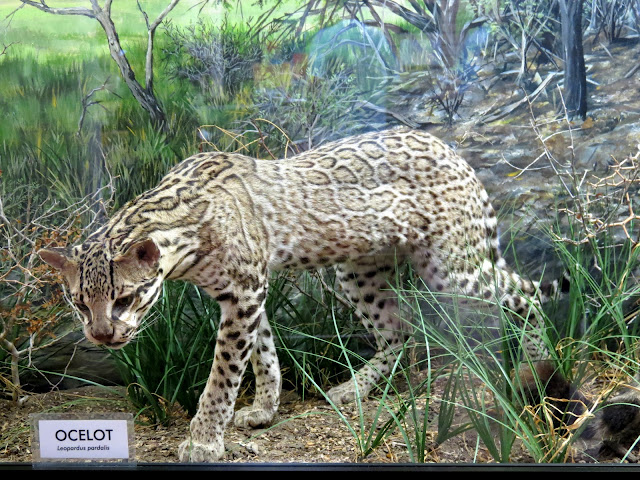 She went to the Laguna Atascosa National Wildlife Refuge.  Here she was supposed to find me an Ocelot friend, but all she found was a stuffed one in the visitor center!  This did not make me very happy. 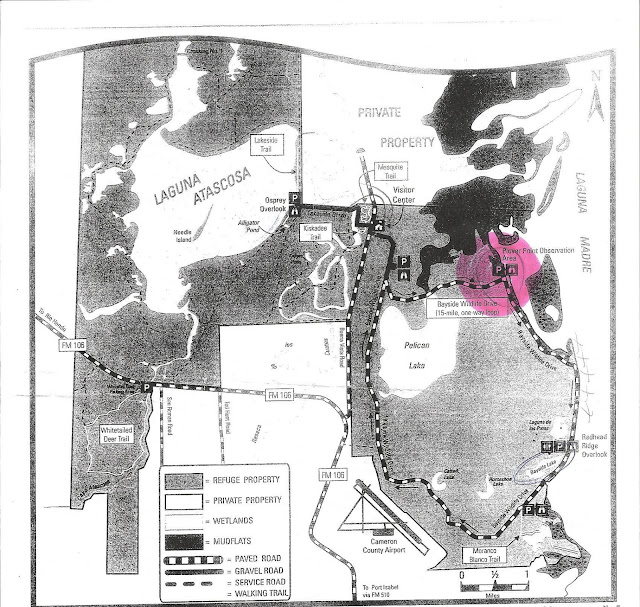 Mom said she searched and searched in the area noted on the map in pink where they were observed the most, but no Ocelots to be found.  Do you suppose they just did not want to be my friends?  I sure hope not. 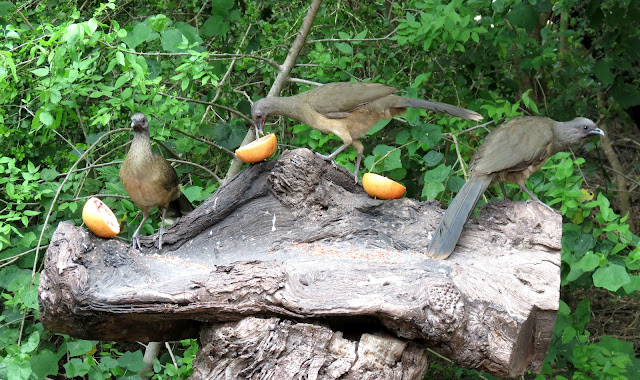 Can you believe that the only animal friends mom found for me on this stop were these Plain Chachalacas?  They seemed very tame and were eating some fruit left out by the wildlife refuge workers.  This is a large chicken-like bird and it gets it's name from it's loud obnoxious calls.  It lives mainly in Mexico, Central and South America and it is the only member of the family of guans, currasows, and chachalacas to reach the United States into South Texas!  Wow!
Ok, that wraps up mom's short Big World Report to South Padre Island.  What's next, mom?
Before you go, please stop by JB's SMALL WORLD too, thanks!
Posted by JB's Big and Small Worlds at 2:39 PM 2 comments: Links to this post

As mom continued on her walk through the South Padre Island Birding Center marshes, another Great Blue Heron greeted her. 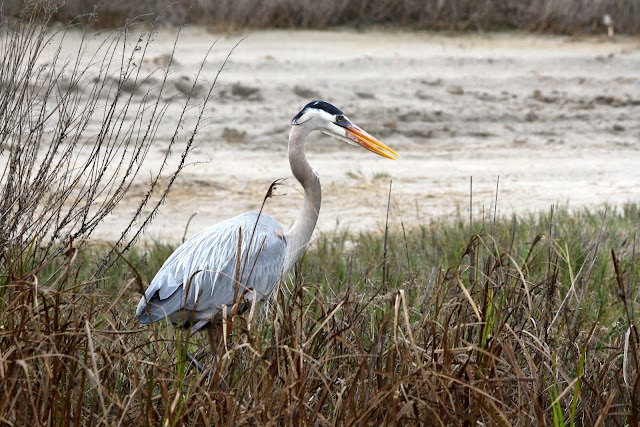 He told mom to be careful as there were some dangerous creatures lurking in the marsh grasses!  Danger, Danger! 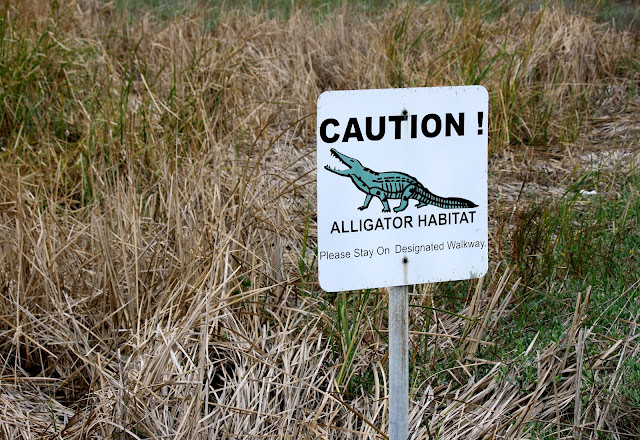 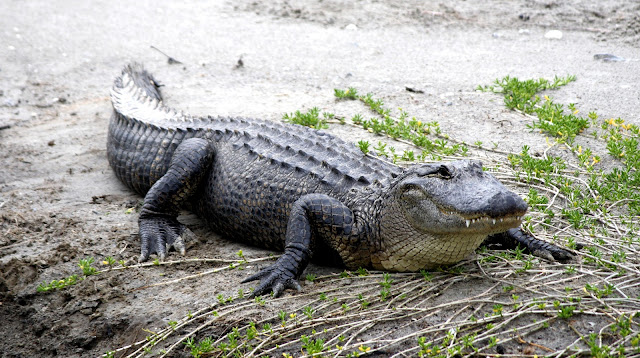 And then mom saw one!  It was an American Alligator, laying on the other side of the water from her! 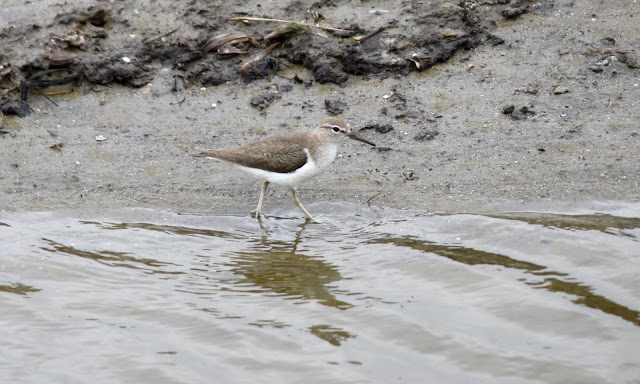 There was as little bird, that looked like a Piped Plover, walking nearby the Alligator. Mom called out to him, "Danger, Danger!"
That does it for mom Big World Report from the South Padre Island Birding Center.
Just one more post coming from this trip, as mom went looking for Cats next!
Before you go, please stop by JB's SMALL WORLD too, thanks!
Posted by JB's Big and Small Worlds at 11:13 AM 5 comments: Links to this post

Here we are, continuing on from my last post from South Padre Island, TX.  Mom followed the direction of the Great Blue Heron in the last post and went over to the South Padre Island Birding Center.
Mom did her best to find me a smorgasbord of new birdie friends! 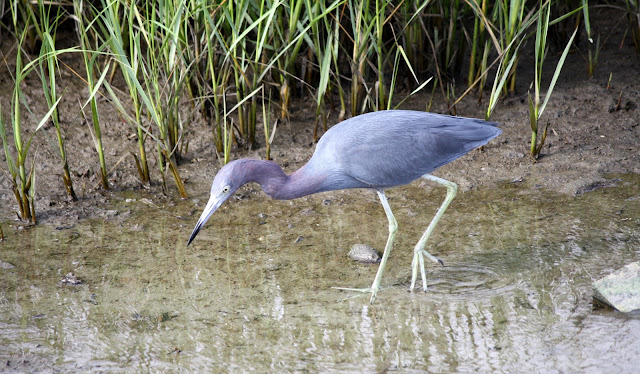 First up to greet mom, was this fashionably purple, Little Blue Heron.  He was very friendly with mom and kept hanging out near her. 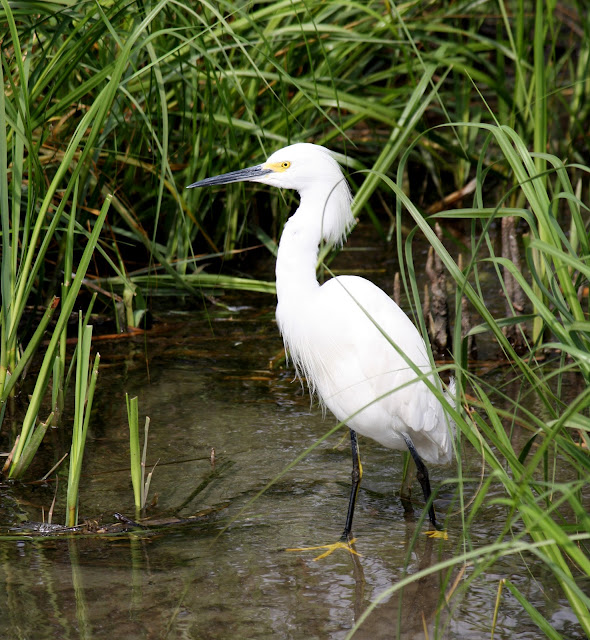 Next to introduce himself was this Snowy Egret.  He sure has some wonderful yellow feet.  He is also quite fashionable! 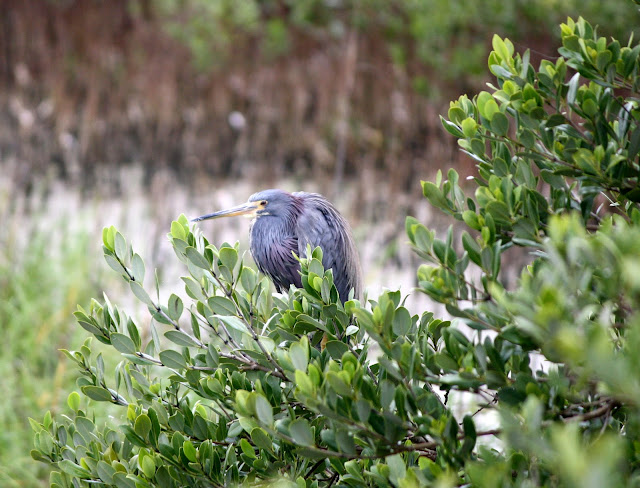 I think this guy is a Tri-Colored Heron, and he was very striking in appearance.  Mom could not get close enough to him to speak to him, however. 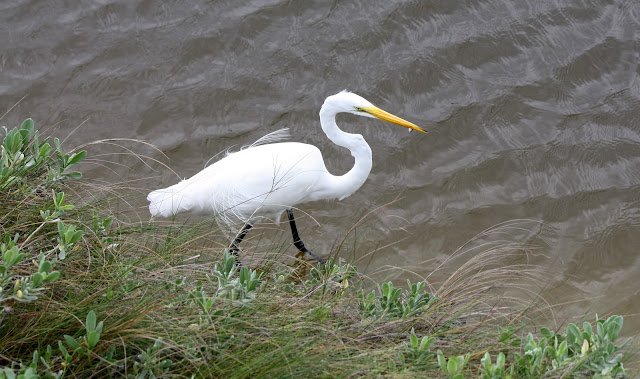 I have seen these before and this is a Great White Egret.  He was spending the day fishing! 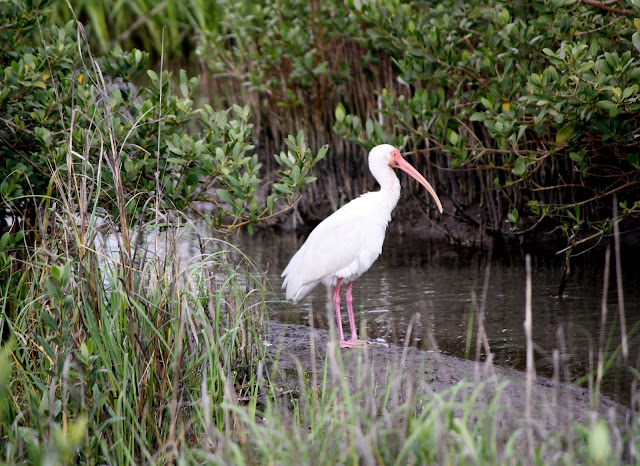 Last but not least, this is a White Ibis.  He was a bit elusive and this is the best shot mom got of one of these guys..... 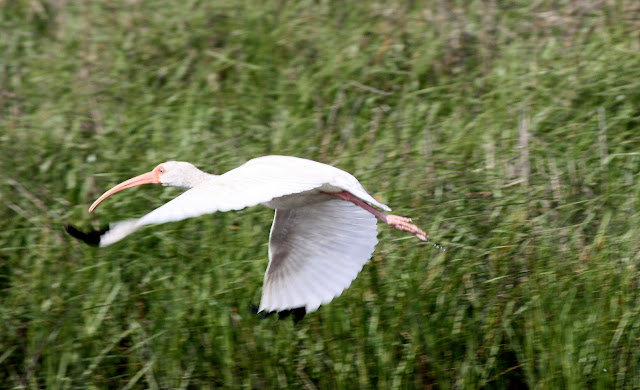 ....till he flew away, showing his fashionable black wing tips!
So it went on mom's birdie smorgasbord Scavenger Hunt! 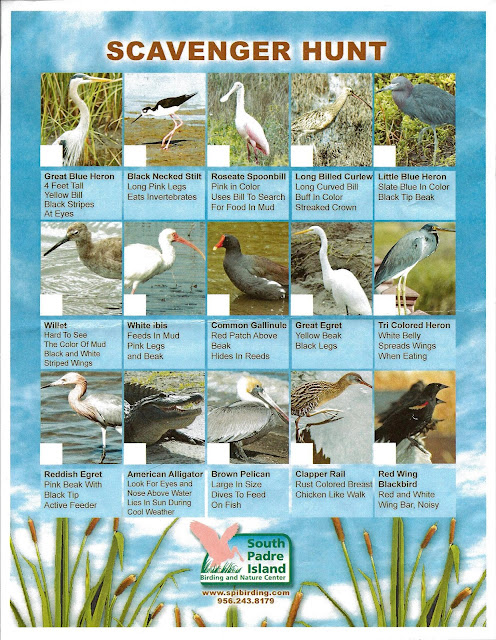 Mom tried the best she could, and met as many new birdie friends for me as possible!

Before you go, please stop by JB's SMALL WORLD too, thanks!
Posted by JB's Big and Small Worlds at 11:59 AM 3 comments: Links to this post 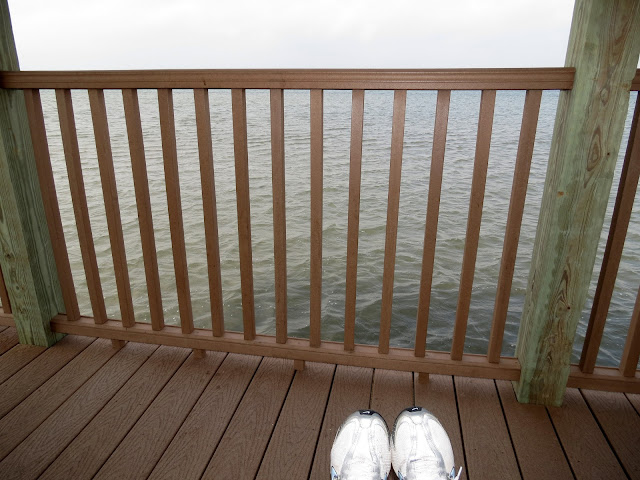 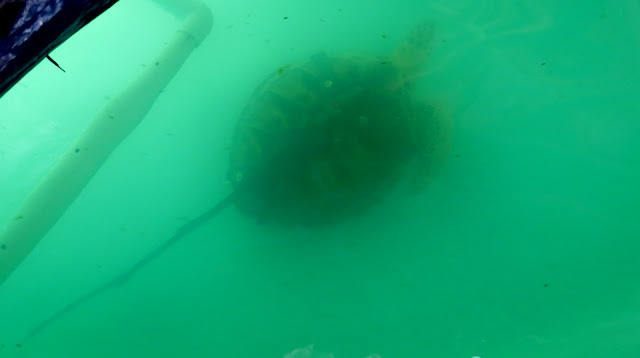 Mom did find Allison, at Sea Turtle Inc, but she must have been taking a Cat Nap at the bottom of her tank, as mom did not get to speak to her in person.  You can barely make out her one limb, and harness on her which helps her to swim.  She lives in a pretty small tank, and mom was sad to see that, but this is likely the only way Allison can survive with one limb. 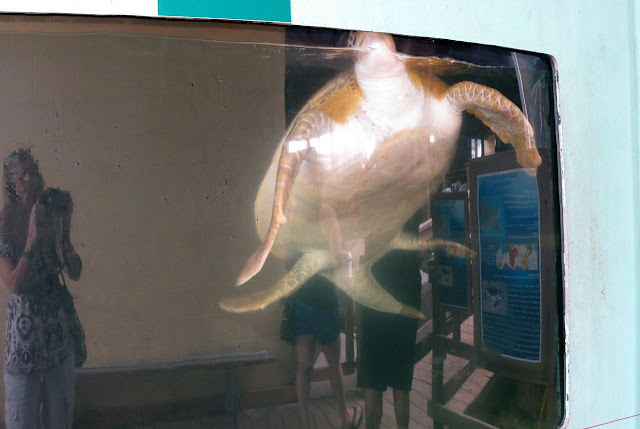 Here is mom introducing herself to this very large Loggerhead Turtle.  This type of Turtle as an adult can weigh 170-500 pounds! 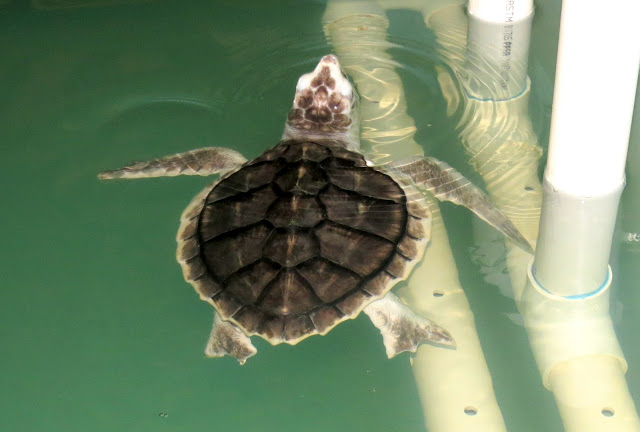 Then there was this smaller Atlantic Green Sea Turtle who came up to the top of his tank to greet mom.
He said:  "Tell JB, I am super excited to be her friend!" 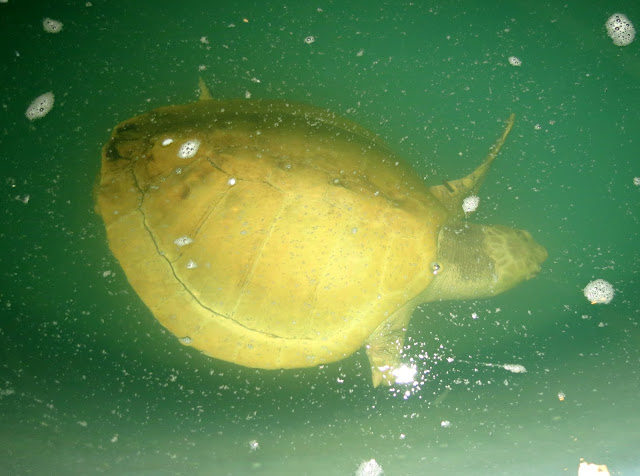 Here is a Kemp's Ridley Sea Turtle, also very happy to be my friend! 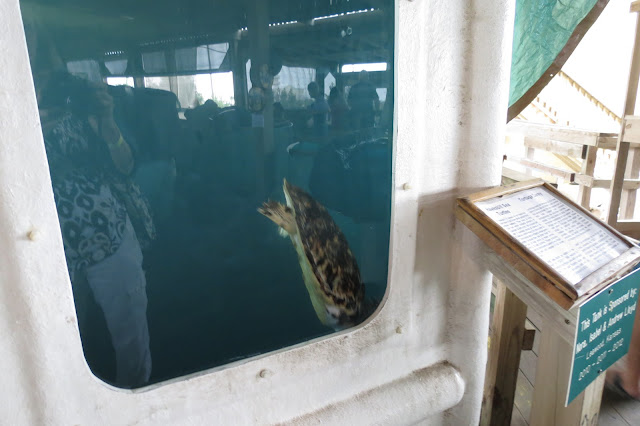 Here is my mom still hard at work on Big World Assignment, looking at a Hawksbill Sea Turtle.  Again, mom was sad to see how small the tanks were, but likely necessary for the center's rehabilitation work. 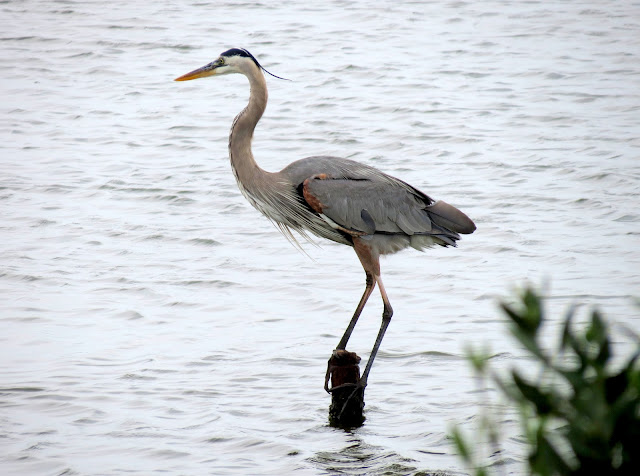 Then as mom was leaving the Center, a Great Blue Heron hollered at her:
"Are you JB's mom?  You are going to have to check out the South Padre Island Birding Center before you go home to JB!"
To be continued, with some of my favorite kinds of friends.....Birdies!!
Before you go, please stop by JB's SMALL WORLD too, thanks!
Posted by JB's Big and Small Worlds at 12:01 PM 4 comments: Links to this post